What about the menz? Low employer attachment and ineligibility for partner parental leave 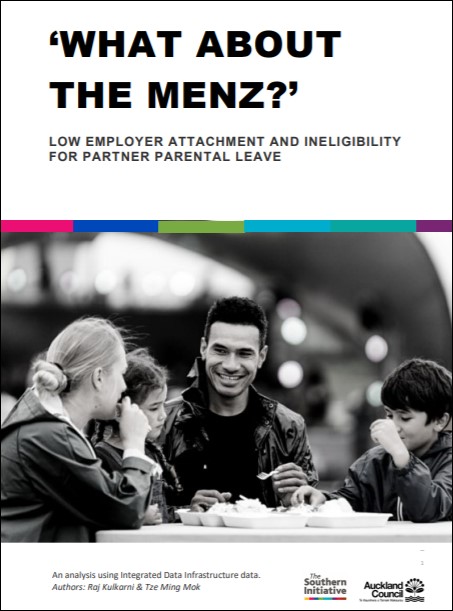 In 2018, the Social Wellbeing Agency (SWA) in collaboration with The Southern Initiative (TSI) used Integrated Data Infrastructure (IDI) data to describe what was going on for families ‘Having a Baby in South Auckland’ (HaBiSA). One of the study’s findings was that income gaps for low-income fathers in the birth month as they took unpaid leave or quit their jobs, seemed under-researched, despite the potential impact of precarious household income or a lack of paid leave during this crucial period.

In this study TSI, with the support of SWA, carried out longitudinal and time series analysis of IDI income data for the fathers of a cohort of 53,000 New Zealand babies one year on either side of birth. We looked at how income and occupation affected peoples’ ability to take time off at all – as indicated by dips in income around the time of birth. We also estimated how many dads were eligible for parental leave around the time of their baby’s birth – as measured by their length of attachment to their main employer.

We found that for dads who worked for wages, one in six might be missing out on eligibility for any partner parental leave from their main employer when their babies were born, as eligibility in New Zealand depends on continuous attachment to a single employer for at least six months. For Māori and Pasifika this was more like one in four wage-earning dads.

Precarious, casual or seasonal jobs and the big industries that rely on them, like construction, agriculture and admin temp agencies, appear to contribute to dads missing out on parental leave entitlements. Māori or Pasifika dads are more affected due to their concentration in these types of jobs and lower pay on average. South Auckland dads were, on the face of it, more likely than those in the rest of the country to miss out on leave. But once controlling for age and ethnic group this South Auckland disadvantage was no longer statistically significant – it was fully accounted for by the demographic concentration of socioeconomic disadvantage.

We also found that the richest dads have the biggest and longest income dips around the time of a baby’s birth, while low-income working dads have shallower and shorter dips. It seemed likely that low-paid dads were less likely to be able to afford to take time off paid work to support babies and partners, given that secondary caregiver parental leave in New Zealand is
unpaid.

However, for the lowest-income dads, the birth of a baby was not simply a vulnerable time but a potentially transformative period, as they increased rather than decreased their income. Expected arrival of a baby seemed to be a strong motivating factor to get income into the household, either though entering the workforce or increasing working hours.