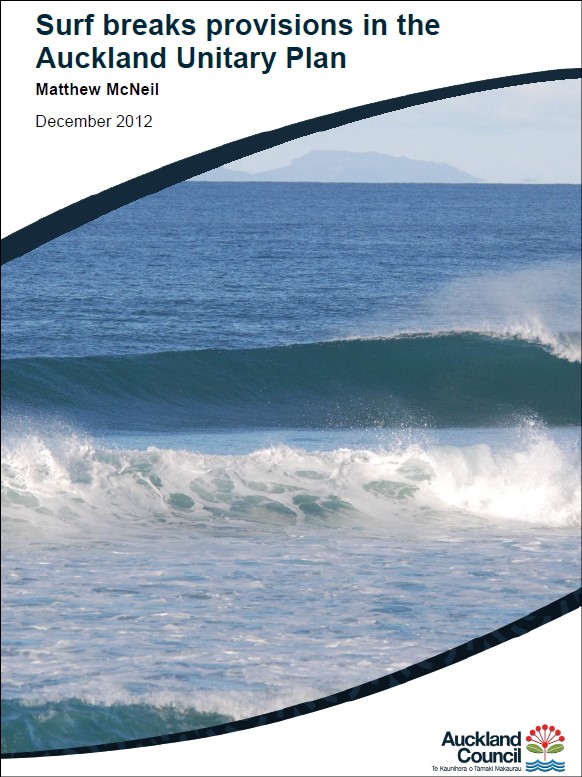 The purpose of this report is to support the development of Auckland Unitary Plan (AUP) provisions relating to surf breaks. The AUP will be a combined plan under the Resource Management Act and will include a regional policy statement, regional plan, regional coastal plan and district plan for the Auckland Region.

Previous Auckland planning documents have not included surf break-specific provisions. The need to reconsider this approach reflects the importance of surf breaks to Auckland, and increased recognition that activities can adversely affect surf breaks. The New Zealand Coastal Policy Statement 2010 (NZCPS) includes a policy on surf breaks of national significance, and acknowledges that surf breaks can be an important element of natural character. Auckland Council is considering how similar provisions should be applied through the AUP for the surf breaks that are significant for Auckland.

This report sets out the background to why the AUP should include provisions specific to surf breaks, and outlines the process undertaken to spatially identify ‘significant surf breaks’ and their values. The process included an assessment by internal council staff and a survey of surfers. From the survey results it is possible to identify the different values that users associate with each break. For example, while isolated breaks have a lower value in terms of usage and sometimes popularity, they often rate higher in terms of wilderness values and consistency of surfable conditions. The more accessible ‘urban’ surf breaks are highly popular, even though they are inconsistently surfable and have low wave quality. The surf breaks with the highest overall popularity were the more accessible and consistent breaks, which also have high landscape values, such as the west coast beaches, and Te Arai and Pakiri on the north east coast.

This report presents draft provisions for inclusion in the draft AUP. These include several policies relating to surf breaks, a definition of ‘surf break’, a schedule of significant surf breaks and their values, and maps of those surf breaks.