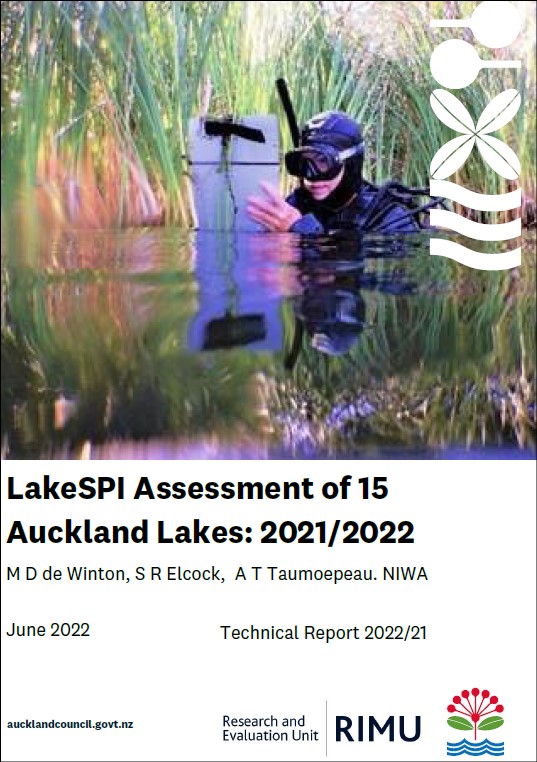 Auckland Council undertakes statutory environmental monitoring, including requirements under the National Policy Statement for Freshwater Management (NPS-FM). The LakeSPI (Submerged Plant Indicators) method was developed by NIWA to assess the ecological condition of lakes and more recently, two LakeSPI indices were adopted as ecosystem health attributes under the NPS-FM. These attributes assign lakes to bands A-D and sets a national bottom line as a minimum acceptable condition, with D band lakes falling below this bottom line. The NPS-FM directs that reassessments of these attribues is made every three years.

Auckland Council contracted NIWA to assess the ecological condition of 15 natural lakes within the Auckland region using LakeSPI. Surveys were completed between December 2021 and April 2022. Features of aquatic vegetation structure and composition were recorded and used to calculate three indices that are expressed as percentages of a lake’s highest potential condition. A higher LakeSPI and Native Condition Index denotes better lake ecological condition and higher Invasive Impact Index denotes poorer lake condition. Lakes that do not have submerged vegetation (<10% plant cover) are termed ‘non-vegetated’, receive a default LakeSPI Index and Native Condition Index of 0%, and are considered to be highly impacted. Two lakes had been stocked with grass carp to eradicate aquatic weed and so were not considered suitable for a LakeSPI assessment.

The 13 assessed lakes had a wide range of current LakeSPI scores, ranging from a LakeSPI Index of 0% to 68%. Thirteen per cent of the Auckland lakes had a ‘high’ ecological condition, having substantial native vegetation character (Native Condition Index >50%) and the general absence of major impacts from invasive submerged weeds (Invasive Impact Index <50%). Thirteen per cent of lakes with a ‘moderate’ ecological condition reflected differing combinations of weed impact and native plant development. Thirty-nine per cent recorded a ‘poor’ condition (LakeSPI Index <20%), due to invasion by two of the worst submerged weeds in New Zealand, Ceratophyllum demersum or Egeria densa, giving an Invasive Impact Index ≥70% and Native Condition Index of ≤11%. Thirty-one per cent of lakes were ‘non-vegetated’. This included two lakes that have previously had substantial submerged vegetation and two lakes that have been non-vegetated for >30 years.

All 13 lakes suitable for LakeSPI assessment had been previously assessed. Fifty-four per cent appeared to be in a stable condition, with changes in LakeSPI Index of ≤5% since the previous survey. Reductions in LakeSPI Indices of >5% suggested a declining lake condition for 31% of lakes. 15% of lakes showed improvement with a reduction in the Invasive Impact Index and an increase in the LakeSPI Index.

Risks to the ecological condition of Auckland lakes include water quality degradation, compounded by impacts from exotic fish, and invasion by invasive weeds in those lakes that retain native submerged vegetation. Lakes stocked with grass carp should be excluded from LakeSPI monitoring but vegetation status checked every five years, approximately. The remaining lakes should be resurveyed every three years, although there is scope to change this to annually if an intervention is undertaken or if a change in lake condition is suspected.