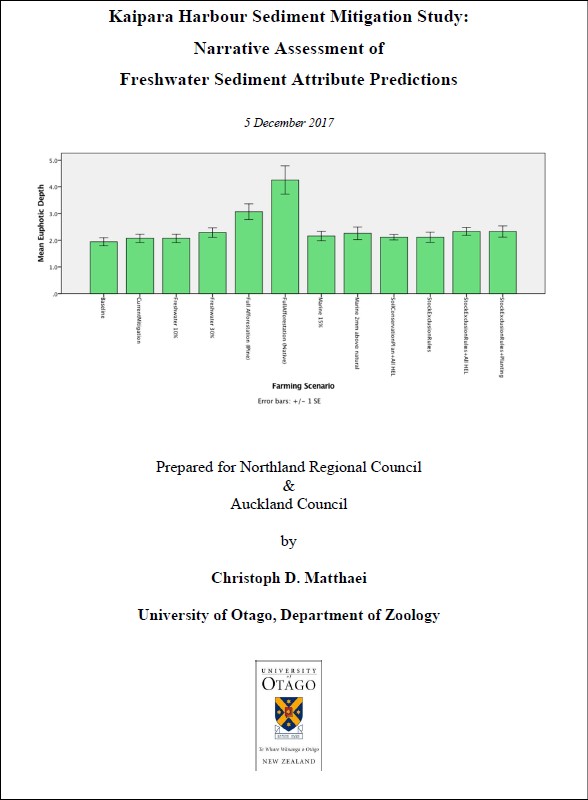 Extract from the Executive Summary:

Introduction. Northland Regional Council with support from Auckland Council and Ministry
for the Environment have contracted a consortium led by Streamlined Environmental Ltd and
consisting of Streamlined Environmental, Landcare Research, NIWA and the University of
Otago, to conduct the Kaipara Harbour Sediment Mitigation Study (the Study). The first aim of
the Study is to develop a catchment economic model for use in assessing the economic costs and
environmental benefits of a range of scenarios for mitigating sediment losses to rivers and
estuaries within the Kaipara Harbour catchment. The second aim of the Study is to develop a
management tool for use in formulating consistent farm-scale sediment mitigation plans. The
tool will be easily usable by land management advisors in the field to identify appropriate
actions to mitigate critical source areas of sediment under different land uses at the farm scale.

This report. This report provides a narrative assessment of how changes in sediment attributes
in freshwater in response to mitigation applied in the catchment will translate into changes in
ecosystem health and functioning and certain values derived by humans from the use of water.
Background. Daigneault et al. (2017) report on the catchment economic modelling done for the
Study, which was performed with the spatially explicit economic land use model, New Zealand
Forest and Agriculture Regional Model (NZFARM). The model incorporated data and estimates
from economic and land use databases and biophysical models. Annual sediment loads into
seven river subcatchments from various land uses have been estimated using the SedNetNZ
model (Dymond 2016). A harbour sediment budget that takes as input those sediment loads has
been constructed. Land-based mitigation costs and effectiveness in reducing sediment have been
obtained from a range of sources. ...