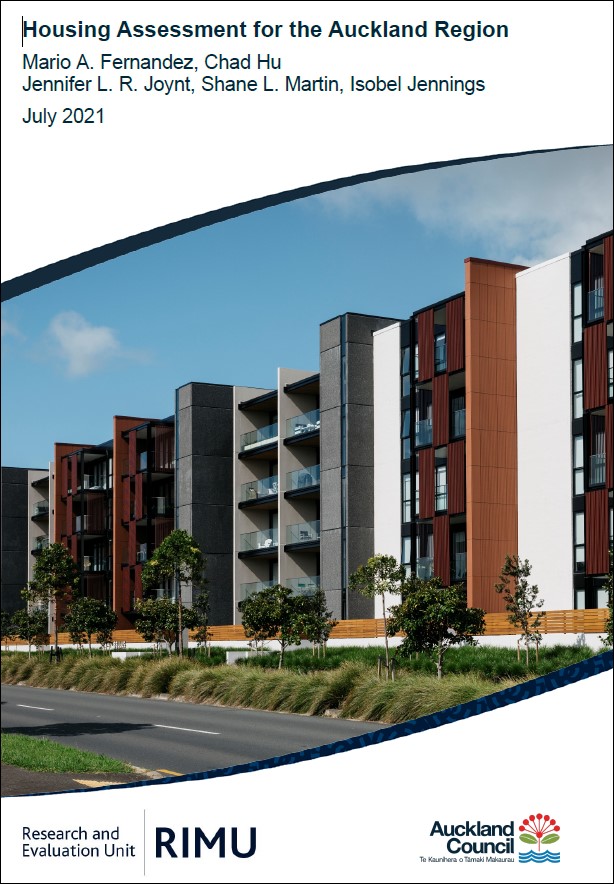 A housing assessment for the Auckland region has been completed to show the projected supply and demand for housing over the next 30 years.

The Auckland Council Housing assessment for the Auckland region is required by the National Policy Statement on Urban Development 2020.

The assessment covers Auckland’s urban environment and examines whether there is sufficient development capacity to meet the projected increase in demand for housing as the city’s population grows.

However, it also identifies that the delivery of affordable housing at pace and scale will be an ongoing challenge and that this is strongly influenced by many other complex factors outside of the role of territorial authorities.

The full Housing assessment for the Auckland region is available here. (Download pdf on the right)

In August 2020, the National Policy Statement on Urban Development (NPS-UD) came into effect with the purpose of boosting the competitiveness of the housing and urban markets as a mechanism to improve access to affordable homeownership through better planning decisions. As part of evidence-based decision-making, the NPS-UD requires that the Auckland Council develop a Housing and Business Development Capacity Assessment (HBA) that provides information on the demand and supply of housing and business land, over the short, medium, and long-term, and the impact of council’s planning and infrastructure decisions.

The NPS-UD is prescriptive in nature and shares commonalities with its predecessor, the National Policy Statement on Urban Development Capacity (NPS-UDC) 2016, but does not provide details for implementation. The NPS-UD differs from its predecessor in that it provides space for users to refine the terminology used and develop appropriate assessment methods, tailored to the context of individual territorial authorities.

Since the adoption of the Auckland Unitary Plan (AUP), Auckland’s annual dwelling supply has reached an all-time high, and the latest consenting data from the council and Stats NZ shows this increase continuing. This HBA is the latest in a long series of housing and business development capacity supply monitoring work for Auckland, and aims to meet the requirements of the NPS-UD. It builds on previous monitoring work by analysing the impact of housing supply on housing affordability, that is, it assesses affordability through the lens of ordinary home buyers who are experiencing increased difficulty in entering the housing market. However, there are aspects that are not included in this HBA and are left for future assessments and research.
The key findings and implications of this HBA are summarised below.

3. To identify capacity that is commercially feasible, two capacity scenarios are used – the maximum percentage of profit yield and the minimum priced dwelling units scenarios. Approximately 840,000 dwellings are commercially feasible for the maximum percentage of profit yield scenario, where the average sales price is $1.66 million and terrace housing comprise most of the feasible typology. Under the minimum priced dwelling scenario, about 1.4 million dwellings are commercially feasible, where the average price is $1.04 million with an average floorspace of 107 square metres. Apartments and terrace housing comprise over 84 per cent of the feasible dwellings tested under the minimum priced dwelling scenario.

2. The initial assessment of the bulk water supply and wastewater networks indicates that of net plan enabled capacity, 57 per cent is infrastructure ready in the short-term, 77 per cent in the medium-term, and 99 per cent in the long-term.

3. Although constraints exist within the existing networks, projects funded through the Long-term Plan and identified in the Infrastructure Strategy will continue to unlock further development capacity across the region. This assessment is not required to, and therefore does not, take into account local infrastructure requirements (which is usually developer built), and may play a significant role in enabling growth in specific areas.

Demand and sufficiency of capacity

2. Delving deeper in the housing demand-supply paradigm, this HBA uses the concept of intermediate market households as a benchmark to assess the affordability aspects of the competitive market due to the influence of the NPS-UD (i.e., greater releases of land capacity). The intermediate households consist of private renter households and the level of income required to affordably pay the mortgage on a dwelling purchased at the lower quartile dwelling sale price. Required income is $132,300 for a sales price of ($770,000) (Mitchell 2019, 2020).

5. To assess the sufficiency of affordable housing development capacity, five supply scenarios are constructed to represent the whole spectrum of the housing market. At one end, the Upper-range and Mid-range scenarios reflect existing housing stock delivered at prices capped at $1.6 or $1.35 million, respectively. Then the Minimum-priced, Full-spectrum and Conditional-affordable scenarios represent relatively more affordable conditions.

6. Simulations of the supply scenarios and a sample of households reveal a large discrepancy between the distribution of prices of new dwellings (deemed as commercially feasible) and the incomes of households. For the Upper-range scenario, a large share of households cannot afford to buy a dwelling. Out of the 6000 additional feasible dwellings, only 392 would be bought (rate of take-up of 6.5%). The average price of bought dwellings is $1.56 million and the average income of the buyers is $214,000. For the rest of the scenarios, it is observed that the lower prices result in a greater rate of take-up where even lower-income households (earning approximately $60,000) manage to become homeowners. However, the traded dwellings’ floorspace is on average 62 square metres, (representing an average sized one-bedroom apartment) and the bulk of buyers correspond to couples or couples with children.

7. A metric of the effectiveness of affordability policies could be defined by how long it would take to halve the size of the intermediate market (to 48,578 households). Under the core assumptions of the NPS-UD, that halving would occur within a generation (18 years) only if the rate of growth of the supply of affordable housing (dwellings priced at $770,000 or less) is 25 per cent annually. For the same halving to occur within a decade, the rate of growth should be 45 per cent annually. If the rate of growth of affordable housing is equal to household growth (2.2%), the mathematical model fails to find a finite solution. Thus, the lowest rate of growth admissible to find a finite solution is five per cent which implies at least 124 years for the halving to occur.

1. The AUP has enabled a vast amount of housing development capacity within the existing urban area and much of the capacity is commercially viable under the current market conditions.

2. That being said, it is likely that any affordability improvements influenced by the NPS-UD assumptions could be concentrated on households earning well above Auckland’s median income.

3. Realisation of the commercially viable capacity at an affordable level becomes uncertain because of the discrepancy (or incompatibility) between the high prices and the purchase power of households. That is, a dwelling may not be realised unless there is someone who can pay for it.

4. More dwellings entering the market does not imply that lower-income households will be able to buy a dwelling. Market efficiency is still achieved, the market remains competitive, as intended in the NPS-UD, but the social outcome is increasingly harder to achieve as revealed by this HBA.

5. The HBA then shows that on a yearly basis, the capacity reasonably expected to be realised could be negligible or at least incompatible to a large share of the population represented in the form of intermediate households.

6. Housing capacity and supply are only parts of the equation. While providing an enabling planning policy environment is fundamental to create greater development potential, there are many other dimensions of complexity out of the scope or control of territorial authorities that may have a greater impact on affordability and competitiveness. The NPS-UD could have an impact on prices over time as more supply enters the markets, enables capacity in accessible locations and provides the opportunity to revisit planning provisions and zoning. However, overall, any improvements on affordability for intermediate households (or any other target groups earning below the median income) are likely to be small, if not negligible, until intervened via other means to deliver housing by volume and at pace.