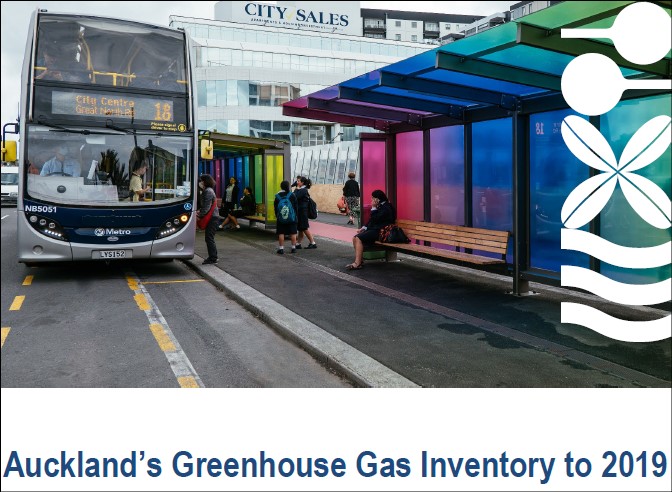 Auckland Council periodically (annually since 2018) updates Auckland’s greenhouse gas inventory and details the gross and net emissions (in kilo-tonnes of carbon dioxide equivalent, kt CO2e) from the six main sectors that make up most CO2 emissions in Auckland. In line with best practice, each inventory draws on the most recent and best available data. Where new or improved data is available, historic emissions are also updated.

The 2019 inventory reports higher historic emissions than the previous inventory. This is because new and improved data has become available, and improved methodologies to calculate the estimates have been developed and adopted.

Despite changes to historic estimates, the overall emissions profile and trends across all years has remain unchanged, and transport is still the biggest source of emissions for Auckland.

From the executive summary

Te-Tāruke-ā-Tāwhiri: Auckland's Climate Plan sets the target of limiting temperature rise to 1.5 degrees of warming and net zero emissions by 2050 with an interim emissions reduction target of 50 per cent by 2030 (against a 2016 baseline). Decarbonisation pathways were developed based on the 2016 inventory and provisional emissions for 2017-2019. A timely emissions inventory identifies and quantifies the most recent sources and sinks of greenhouse gas (GHG) emissions and trends. This provides a robust evidence base and an essential tool to evaluate our progress, frame mitigation actions and inform future policy development. In addition, it provides input to the state of Auckland’s environment reporting.

Auckland’s GHG inventory was first compiled for 2009 and recently for 2018. This inventory reports emissions for 1990, 2009-2019, following the most recently available New Zealand’s Greenhouse Gas Inventory 1990-2019. In 2019, Auckland gross emissions were 12,709 kilo-tonnes of carbon dioxide equivalent (kt CO2e) and when carbon sequestration from forestry was included, net emissions were 11,511 kt CO2e. Transport and stationary energy are the dominant sectors, accounting for 45.2 per cent and 28.1 per cent of gross emissions, respectively. Carbon dioxide (CO2) contributed 85.4 per cent, methane (CH4) 8.0 per cent, nitrous oxide (N2O) 2.4 per cent and other GHGs 4.3 per cent. ...