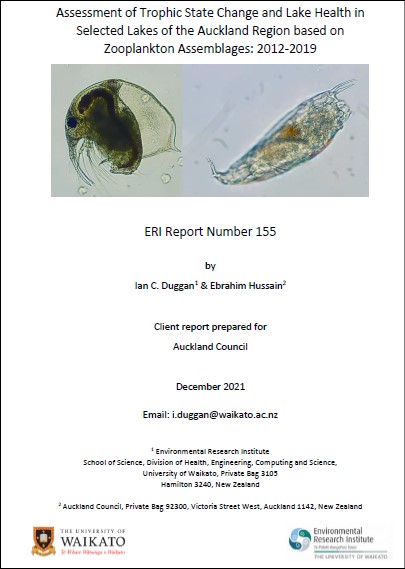 Assessment of trophic state change and lake health in selected lakes of the Auckland region based on zooplankton assemblages: 2012-2019

This report provides an assessment of eight natural lakes in the Auckland region, from zooplankton samples collected between 2012 and late 2019 at a frequency of six to eight samples per year. From these samples, the lakes have been assessed to establish their trophic state, the proportion of non-native zooplankton species, and the proportion of crustacean zooplankton relative to rotifers.

Inferred trophic states of the lakes based on zooplankton composition has been generally ranked in a similar manner over time; of the lakes sampled over the entire period, Lake Tomarata typically had the best inferred water quality (generally as mesotrophic, though late in the study it sat near the eutrophic boundary). The median Trophic Level Index (TLI) based on zooplankton for this lake was 3.5 between 2015 and 2019. Lake Whatihua, only sampled from late-2017, was also assessed to contain species typical of mesotrophic conditions (median TLI = 3.4). For the remaining lakes, median TLI values based on zooplankton composition between 2015 and 2019 were; Rototoa 3.5 (mesotrophic), Wainamu 4.0, Pupuke 4.3 (both eutrophic) and Kuwakatai 5.2 (supertrophic; sampling ceased in August 2017). Lakes Kereta and Spectacle were not assessed during the 2015-2019 time period.

On average, larger crustaceans dominated over the smaller rotifers in all of the Auckland lakes monitored. Lake Rototoa was the least crustacean dominated (53%), followed by lakes Tomarata (58%), Kereta (68%), Spectacle (78%), Whatihua (79%), Wainamu (81%), Pupuke (88%), and Kuwakatai (95%) was the most crustacean dominated. Lake Wainamu appears to have reduced proportions of crustaceans between 2018 and 2019 relative to the 2012 to 2017 period, which may indicate this lake is undergoing a change in its trophic ecology; control of pest fish ceased in this lake in 2015, including of European perch (Perca fluviatilis), which may be reducing the importance of larger, more visible crustaceans.