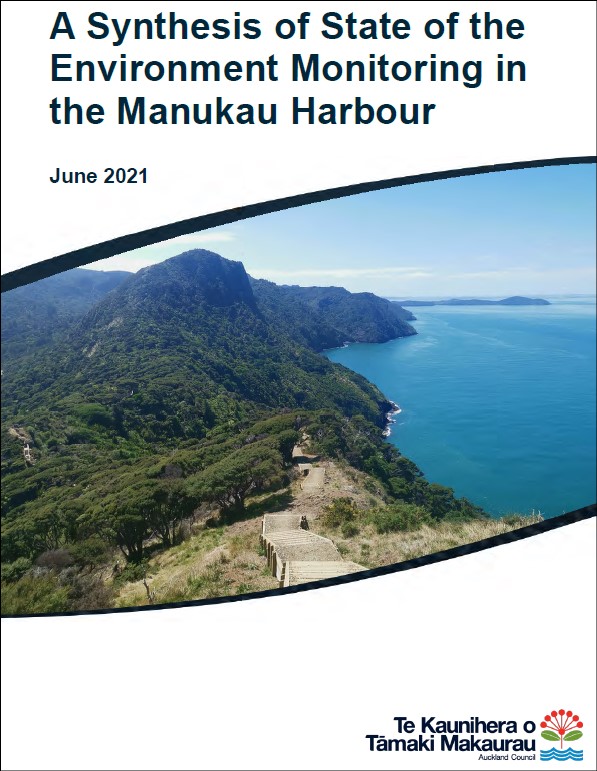 The Manukau Harbour is a large, productive, and important body of water for both Tāmaki Makaurau and Aotearoa. It provides many ecosystem services of great value to humans and supports a diverse array of plants and animals. The types of land use and activities that occur within the catchment surrounding the Manukau are the driving force behind the harbour’s health, affecting water quality, biodiversity, and ecological processes. State of the environment monitoring in the Manukau began in 1969, with many programmes underway for several decades. This report leans on these long datasets and draws together monitoring results across air, land, and water domains, to describe the current state of the environment for the Manukau.

Landcover within the Manukau Harbour catchment has remained relatively stable over the last 22 years, with over half the area dominated by exotic grassland and one fifth as urban. Less than one tenth of the original forest extent remains and much of this has been degraded or disturbed. Species richness of native vegetation is highest in the Waitākere region, while elsewhere in the catchment, lower native plant species richness and higher proportions of weed species are observed. Problematic weeds and pests are only absent where intensive weed and pest control takes place. Native bird species accounted for 54 per cent of all birds counted in forests, and 44 per cent in wetlands.

The rich soils around the Manukau are highly valued for their productivity and for supporting food provision. Rural soils are often over-fertilised in horticultural areas and compacted in pastoral areas.

Overall air quality in the Manukau Harbour catchment is good and improving, however exceedances of the National Environmental Standards for Air Quality do sometimes occur around busy roads or with exceptional events like the Australian dust storms and bush fires.

Rainfall records up to 2019 in the Manukau Harbour catchment show that rainfall in 2011, 2017 and 2018 was more than 20 per cent higher than the annual average. This led to increases in both river flows and groundwater levels. Groundwater levels have been increasing in many aquifers, while some deep sandstone aquifers are showing decreasing levels, likely due in part to water takes. There are high concentrations of nitrate in shallow volcanic aquifers. These aquifers feed some of the streams in the southern Manukau Harbour catchment, which contributes to high nitrate levels in surface waters.

Stream ecosystems in the catchment typically show poor water quality, limited habitat structure and altered flow, and generally have low ecological value. Zinc and copper are prominent urban pollutants in streams, although some improvements in concentrations are being seen. Several aspects of stream water quality are in a degraded state with the main water quality issues varying among sites representative of different land use pressures. Several of these parameters are showing small improvements, although at a slow rate. In contrast, nitrate is high and continuing to increase in some parts of the catchment.

Coastal water monitoring shows that the Manukau has lower water quality than other harbours in Tāmaki Makaurau. Nutrient concentrations are elevated compared to regional reference guidelines and are highest in the Māngere Inlet and near the Māngere Wastewater Treatment Plant. Significant improvements in coastal water quality occurred after 2001 following an upgrade to the treatment plant, and further small improvements are evident in more recent years. Levels of contaminants (copper, lead and zinc) in marine sediments are elevated in the Māngere Inlet and low at other sites. Excess sedimentation has had negative ecological impacts in sheltered tidal creeks, reducing the abundance and diversity of species living in the intertidal mud and sand flats, however sites are healthier in the body of the harbour.

This report presents and discusses monitoring results and describes current programmes and initiatives for the Manukau Harbour and its catchment, providing an important base for future management decisions.