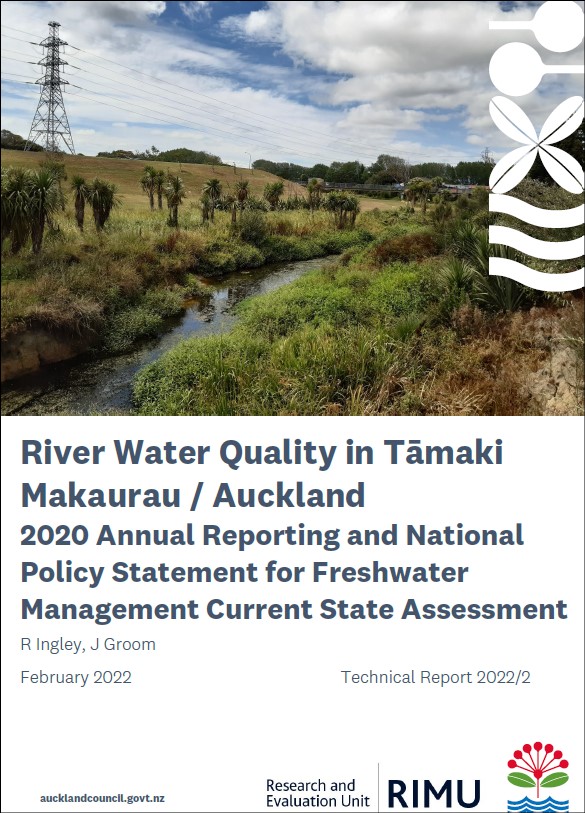 Freshwater environments, including our flowing rivers and streams, wetlands and lakes, are valued by the people of Tāmaki Makaurau / Auckland. We monitor the state of rivers and streams in the region to provide evidence for the integrated environmental management outcomes that Auckland Council is responsible for, as required under section 35 of the Resource Management Act 1991 (as amended). River water quality is monitored monthly at 37 sites across the region using a range of variables to evaluate nutrient enrichment (toxicity and eutrophication), sedimentation and water clarity, metal contaminants, and indicators of faecal pollution. These key issues are influenced by point and diffuse source discharges, land and instream erosion, as well as natural and climatic variability.

The National Policy Statement for Freshwater Management (NPS-FM) 2020 National Objectives Framework (NOF) defines a number of compulsory attributes, and bands ranging from A to D (or A to E for E. coli) for those attributes to measure ecosystem health. This report focuses on the water quality component of ecosystem health. Not all compulsory attributes are currently monitored by Auckland Council. Work is underway to implement these additional requirements. This annual report also presents a summary of variation among sites within the 2020 calendar year, introduces two new monitoring sites, and analysis of additional water quality variables recently added to the programme.

The distribution of NOF bands for the current 2016-2020 assessment period was similar to the previous 2015-2019 period. Regionally there is a low risk of nitrate or ammonia toxicity effects to aquatic fauna even for the most sensitive species. There are localised issues where streams were found to fail national bottom lines in the Pukekohe/Franklin area (nitrate), and in some urban streams (ammonia). Adverse effects from nutrient enrichment can occur at concentrations far lower than nutrient levels that cause toxicity. A quarter of monitored streams were found to have visual clarity levels (measured as turbidity) where moderate to high impacts may be expected for instream fauna, particularly sensitive fish species. This is a provisional grading that should be further calibrated against measured clarity for the region. Only one stream failed the national bottom line for water clarity. Faecal contamination of rivers, as indicated by Escherichia coli, is a widespread issue across Auckland. All urban and rural streams were in D or E bands. While this has implications for human contact with rivers and streams, this assessment is not in relation to identified primary contact sites or the bathing season. Draft regional attributes have been proposed for metal (copper and zinc) toxicity. Several urban streams failed the proposed regional bottom line for zinc. Copper concentrations were elevated in urban and some rural streams, but no sites were below the proposed regional bottom line. These proposed attributes will be revised in the future.