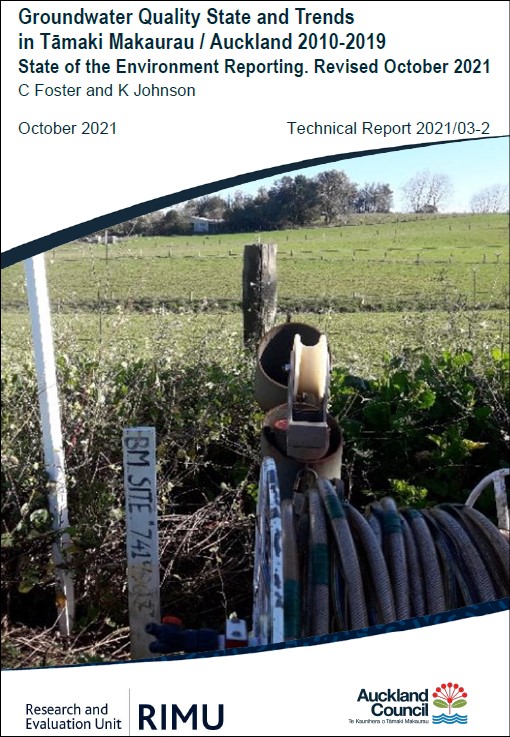 State of the environment reporting

This revision corrects errors made in interpretation of data for Rifle Range Road Shallow, a site in the Pukekohe Central volcanic aquifer. It was noted in the last report that the data showed a large step-change in nitrate, but the cause was not identified. It was discovered that the spike in nitrate was documented by council in the 2013 groundwater quality sampling protocol and was the result of a faulty seal around the casing which led to the ingress of surface water. A report by GNS (van der Raaij, 2015) states that a new well was installed in 2014. The new well is located approximately five metres from the original and has the same construction details (diameter, depth, and screened interval).

The data show that the samples from the new monitoring well have similar water chemistry to pre-2010 data. This is most notable in nitrate, where concentrations nearly doubled during the period 2010-2014 and then dropped back to pre-2010 levels during 2014. A
visual inspection of the nitrate plot shows that the post-2014 data do not appear to follow the same trajectory as pre-2010 data. This could be due to many factors which are not easily isolated.

It is inappropriate to consider groundwater chemistry data (e.g. nitrate or dissolved iron) from the Rifle Range shallow volcanic aquifer as a continuous record, because the data were collected from two different wells over the reporting period. However, the data starting in 2014 are all taken from the newly constructed well, so the current state results still apply and have been retained in the text as originally reported.

The reporting period for trend analysis was 2010-2019, which includes the period of surface water ingress. This site, therefore, does not meet the data requirements for trend analysis (not a single site and insufficient data points, see methods section) and has been removed from trend reporting in the main body of this report. However, this site is important for its location within the shallow, unconfined Pukekohe Central volcanic aquifer and an effort to expand on the available data is presented here to provide the best available reporting for this significant aquifer.

Trend analysis was completed for water quality data for the period 2014-2020, inclusive. This is a shorter period than other analyses in this report. However, the data requirements for trend assessment are met for this analysis (see methodology in Section 3). The results showed a very likely increasing trend, i.e. a degrading trend, in nitrate (Figure 2). Other water quality parameters were also re-assessed and provided in the associated datasheet – Groundwater quality state and trends in Tāmaki Makaurau / Auckland 2010-2019. Revised October 2021. Datasheet.

This reporting is driven by requirements under the Resource Management Act 1991 and the National Policy Statement for Freshwater Management 2020 (NPS-FM, 2020). Water quality is reported against all relevant New Zealand standards. Results relating to the Drinking Water Standards New Zealand do not comprise a compliance-level assessment but are provided for a comprehensive assessment of the current state of groundwater resources. The results from State of the Environment monitoring are used to inform management of potable drinking water supplies and rural productive land use activities, for evidencing the efficacy of urban stormwater and wastewater management, and to inform the management of the flow-on effects on ecosystem health of streams with high groundwater baseflow.

Sites in the Auckland Council groundwater quality monitoring network are grouped by aquifer type and primary water quality stressor. Urban shallow volcanic aquifers are predominantly affected by stormwater and wastewater, and aquifers in the Franklin (shallow volcanic and shallow and deep sedimentary aquifers) and Kumeu (shallow and deep sedimentary aquifers) areas are predominately affected by rural activities such as fertiliser leaching.

Shallow volcanic aquifers in the Franklin area are affected by high nitrate relating to horticultural land use. The National Policy Statement for Freshwater Management 2020 does not include a National Objectives Framework (NOF) for nitrate in groundwater, however the surface water NOF is relevant to aquifers which provide baseflow to streams. Six groundwater sites in the Franklin area had nitrate levels above the surface water NOF
grade D (‘Acute’), these sites are in shallow oxygenated volcanic aquifers that contribute high baseflow to nearby streams. Long-term trends (10 years, 2010-2019) for nitrate show very likely improving trends at four of these sites and likely to very likely degrading trends at the other two sites. Three further sites in the Franklin area, representing deeper aquifers with less oxygenated waters, have no signs of nitrate contamination.

Two sites in the Kumeu West Waitematā aquifer had generally good groundwater quality. Results showed that groundwater in this aquifer was below guideline values for human consumption and did not pose a risk to ecosystem health. Nitrate was very low (five-year median of 0.01 mg/L); however, one site had a likely degrading trend. Ammonia levels were low and trends in ammonia were very likely improving at both sites.

Nitrate exceeded expected natural conditions in the Three Kings Volcanic aquifer, which suggests land use practices are impacting the aquifer. The Three Kings Aquifer is the baseflow source for Western Springs Lake and Motions Stream and likely to be one source of nitrate contamination in surface waters. E. coli (a faecal indicator bacteria) was present in groundwater samples for the Three Kings volcanic aquifer, most likely linked to stormwater and wastewater leakage in urban areas. The long-term trend in E. coli was likely degrading, which indicates faecal bacterial contamination is likely increasing in this aquifer.

Overall, results from the groundwater quality monitoring programme indicate that nitrate is the foremost contaminant of concern for shallow volcanic aquifers in the Auckland region. High nitrate observed in groundwater coincides with both horticultural and urban land uses. The levels of nitrate observed exceeded expected concentrations for natural conditions, New Zealand drinking water standards, and the NOF national bottom line for surface water ecosystem health. Trends in nitrate were predominantly improving in the Franklin shallow volcanic aquifers, but degrading trends were observed in the Bombay Volcanic and Drury Volcanic aquifers. These aquifers provide baseflow to streams, suggesting that groundwater baseflow contributes to nitrate contamination in Franklin streams.

Additional monitoring sites will be added to the programme over the next three years to improve coverage of Auckland’s Aquifer Management Areas and further strengthen our understanding of the effects of land use, climate change, and water abstraction on groundwater quality.