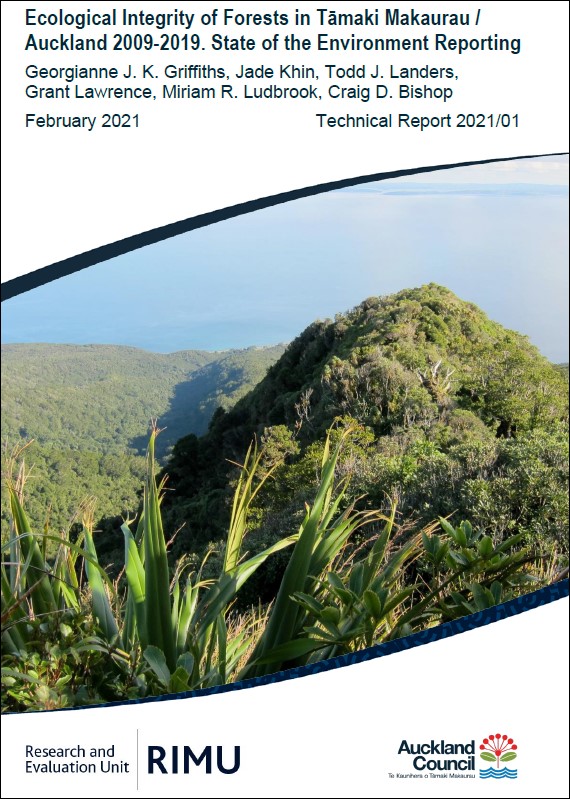 Forest in the Auckland region covers a wide diversity of ecosystems each with its own unique complement of indigenous species. Auckland Council conducts long-term monitoring of the region’s forests as part of its State of the Environment programme to assess the state and trends in forest ecosystems, in fulfilment of Auckland Council’s obligations under the Resource Management Act 1991. Information gained is used to identify issues and inform policy development and environmental decision-making. Forests have ecological integrity when all the indigenous plants and animals typical of a region are present and key ecological functions are sustained. Ecological integrity is described using three elements: ecosystem representation, indigenous species occupancy, and indigenous species dominance. Change in ecosystem representation was examined using Auckland Council’s terrestrial ecosystem classification and mapping, together with geospatial data from the Landcover Database. Species occupancy and indigenous dominance were examined using 10 years of data from the network of unbiased, point-based, spatially stratified permanent forest plots in Auckland Council's Terrestrial Biodiversity Monitoring Programme (TBMP).

At a sub-regional scale there are numerous examples of forest and scrub supporting diverse indigenous plant communities with healthy forest structures. These are more common in the large, continuous forest patches with high habitat heterogeneity such as the Waitākere Ranges, Hunua Ranges and Aotea, and at sites with intensive conservation management including Tāwharanui, Shakespear and the offshore island of Te Hauturu-o Toi. Absence of weed plants is typically a function of low exposure to propagules (e.g. large forest patch size, distant from rural or urban land, offshore island) and weed control. Few forests have high native bird species occupancy, which appears strongly determined by pest animal eradication in fenced or offshore locations. Native bird communities in unfenced sanctuaries appear to be limited, possibly due to continuous pest incursions. There are also numerous examples of forest and scrub with depauperate indigenous plant communities. These are more common in small forest patches where weeds are most abundant and may outcompete natives and disrupt normal ecosystem processes. Tāwharanui Regional Park however, illustrates how the ecological integrity of small forest patches in predominately rural areas can be improved, albeit with considerable effort.

At a regional scale, the ecological integrity of Auckland's forests is strongly impaired by the absence or reduced extent of many forest and scrub ecosystem types, the absence of many native bird species, the widespread abundance of pest animal species and the frequency of weed incursions. Indigenous forest ecosystems have been reduced to 23 per cent of their original extent, with some ecosystem types disproportionately affected. For example, only 16 per cent of kauri, podocarp, broadleaf forest, two per cent of kahikatea, pukatea forest and 0.3 per cent of pūriri forest remain (Singers et al 2017). Much remaining forest and scrub has been disturbed and degraded to such an extent it has been reclassified as regenerating forest and scrub ecosystem types that did not previously occur in the Auckland region. This assessment of the ecological integrity of forests in Auckland has long been implicitly understood; what is new is the use of unbiased quantitative data to examine where and how ecological integrity is impaired, for those components of wildlife that the TBMP measures, namely plants and birds.

As New Zealand’s most populated region, Auckland cannot replace all its lost forest and scrub habitat, but all remaining forest and scrub, however small the fragment, should be recognised as a precious and highly limited natural resource. Best practice for forest bird conservation is generally well understood; sustained pest animal eradication combined with fencing or isolation, native bird reintroductions and indigenous replanting where necessary, give the best conservation outcomes (Binny et al 2020). Successful examples of such conservation practices can be seen in Te Hauturu-o-Toi and Tāwharanui, but these native bird communities need secure forest to expand into if they are to be sustainable (Lovegrove and Parker in review). Many conservation groups across the Auckland region conduct intensive forest restoration and indigenous bird conservation projects, often in collaboration with Auckland Council and other conservation charities e.g. Forest and Bird. Better ecological monitoring and analytical support for these community groups could further enhance their conservation outcomes. This will be necessary if Auckland is to achieve the aim to be pest-free by 2050 (Pest-free Auckland 2050). Creation, expansion and restoration of forest habitats may be necessary to maintain the full range of forest and scrub ecosystem types that once occurred in the region, and provide a buffer against emerging risks such as myrtle rust and the effects of a changing climate. Ultimately, forest conservation needs to take a landscape approach; multi-partner initiatives such as the Northwest Wildlink provide a good example, by maximising the ecological value of and benefit to small and large forest patches.