Diversity, abundance and distribution of birds in Tāmaki Makaurau / Auckland 2009-2019 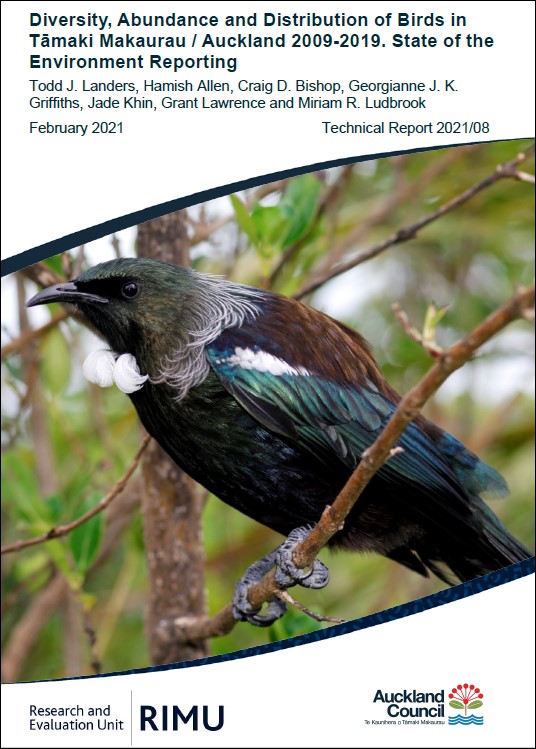 Auckland Council collects a variety of bird data across Auckland as part of its regional Bird Monitoring Programme (BMP), which contributes to reporting on the State of Environment for Auckland, as well as contributing to other environmental reporting obligations. Birds are useful indicators for evaluating biodiversity and are commonly surveyed in New Zealand using the standard five-minute bird count method, which is the basis of the ten-minute bird count method used in this study. This report details the results from the two major land bird programmes in the BMP, each of which takes five years to survey a full rotation: forest (2009- 2018) and wetlands (2011-2019).

Species richness (i.e. diversity) and abundance varied significantly across the region when looking at different Land Classes, ecological districts, large sub-regional areas, and highly managed areas. Sites that were mostly indigenous ecosystems and/or were near large forested areas (Hunua and Waitākere Ranges, Aotea/Great Barrier Island [Aotea] and Te Hauturu-o-Toi/Little Barrier Island [Hauturu]), had the highest indigenous dominance (mean proportion indigenous species of total species), whereas sites in urban and rural areas had the lowest percentages. The highest percentages of indigenous birds were found at well-protected or highly managed forest areas, both on offshore islands and in mainland sanctuaries. Hauturu had the highest percentage where almost all birds counted were indigenous, followed by Glenfern and Windy Hill on Aotea, and the Kōkako Management Area in the Hunua Ranges, where on average ~90 per cent of individual birds counted were indigenous. This shows the high value of these sites as reserves for indigenous birds. No differences were detected between the two completed wetland rotations over this study (Note: forest rotations were not compared; see Methods). Overall, the numbers of introduced species varied more than indigenous species, which generally explained the variation seen in indigenous dominance across the region.

This study identified the importance of large-forested and highly managed areas in the region, and hence the value of these for maintaining high proportions of indigenous species, which in turn contribute to ecological integrity in these areas. These places also function as important sources of indigenous birds, which can spill over into neighbouring areas as more of these are restored. Future completed full rotations in the regional BMP will allow longer-term trends to be assessed so that we can track if bird populations are stable, improving or decreasing, and thus adjust management actions accordingly.