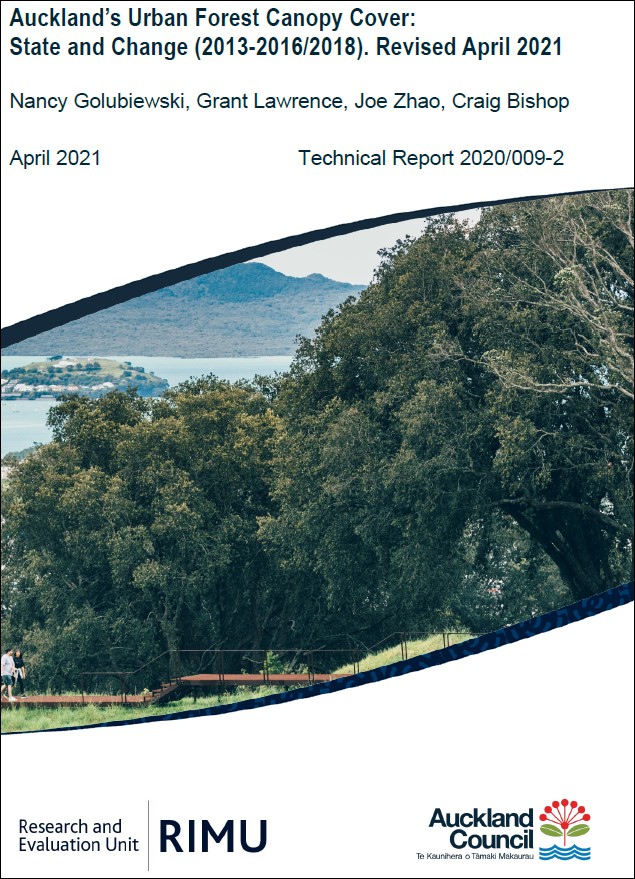 This report has been updated since original publication in July 2020. Inadvertently, an incorrect data input file (all returns instead of first returns), was pulled into the original workflow. That coverage represented the overall density of the canopy (for 2016/18) rather than the intended canopy cover and was not strictly comparable to the existing 2013 tree canopy model.

This report uses a 2016/18 tree canopy model based on first returns and updates results.

The overall findings across the 16 local boards and comparisons to land cover, land-use, zoning, and tenure remain largely the same, with a slight increase in calculated canopy cover across the overall study area and changes to other comparisons.

At the individual local board scale, some results vary. For example, small net gains in canopy cover have been quantified in the southern local boards (which had been measured as net losses in the previous version). Findings for other local boards remain similar to the original report.

Even with the input data correction, it is also important to remember there is still a measure of uncertainty to reported quantities: error is inherent in all datasets classified from remotely sensed data, such as LiDAR. The results do have a margin of error; they are not to be considered 100 per cent precise, but rather a best estimate using current information. (In other words, both false positives – objects incorrectly identified as trees – and false negatives – trees not classified – exist). Broadly, the results present an appropriate approximation of Auckland’s tree cover and its changes. Further work can be undertaken to ground truth and quantify the uncertainty. We remain confident in the methodology and findings presented in this report and will continue to progress our research and update methods to reflect best practice.

The structure and function of Auckland’s forests are important to the region for both the ecosystem services they provide and their intrinsic value. In recent years, a building boom resulting from economic growth and housing demand has resulted in land-use change that includes noticeable tree removals, especially in urban areas where development activities are both intensifying and expanding the built environment. Across Auckland, urban areas expanded eight per cent between 1996 and 2012 and a further four per cent between 2012 and 2018/19.

This project quantified the extent of tree canopy cover across 16 local boards in the central and mostly urban part of the Auckland region: Papakura, Manurewa, Ōtara-Papatoetoe, Māngere-Ōtāhuhu, Howick, Maungakiekie-Tāmaki, Ōrākei, Waitematā, Albert-Eden, Puketāpapa, Whau, Henderson-Massey, Upper Harbour, Kaipātiki, Devonport-Takapuna, and Hibiscus and Bays. Data collected between 2016 and 2018 were assessed and analysed to identify the characteristics of the canopy in this period and to detect any changes that have occurred since 2013. A canopy height model was produced from Auckland Council’s 2016/18 LiDAR data to serve as a comparable tree canopy cover to the 2013 one. ...

This report on the tree canopy presents early findings of the first comprehensive, regional assessment of Auckland’s urban forests and its change over a three to five-year period. It provides an overall assessment, from which more detailed studies can build in the future.

Please send any inquiries about this report to Grant Lawrence, grant.lawrence@aucklandcouncil.govt.nz