Auckland's thriving Māori identity is a point of difference in the world – it advances prosperity for Māori and benefits all Aucklanders.  Auckland embraces its uniqueness founded on te Tiriti and shaped by its Māori history and presence. The contributions Māori bring to Auckland grow and advance Māori social, cultural, economic and environmental well-being.

Information sheet: results from the 2018 Census – Māori in Tāmaki Makaurau. 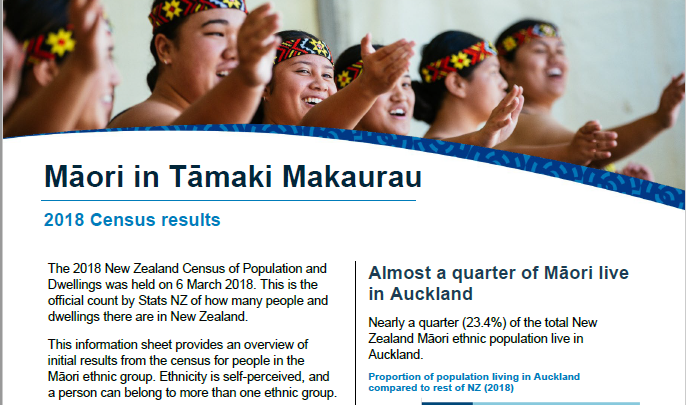 Information sheet: results from the 2018 Census – Māori in Tāmaki Makaurau.

Marae and emergency accommodation: a response to Auckland’s housing and rental shortage

Assesses marae providing emergency housing support. Raises concern that marae can be over-relied on to support Māori, enabling systemic and structural causes for homelessness to be overlooked. DP2017/003

This literature review considers the intersection between indigenous knowledge and local government planning regimes as expressed through the Cultural Values Assessment CVA process that is part of the Resource Management Act 1991 RMA. TR2018/008

Updated Issues of Significance brings together the aspiration of Māori in Tāmaki Makaurau as expressed in the Māori Plan, and the lOS (framed by Te Tiriti o Waitangi Principles) within the first schedule. It enables the Board to develop a framework.

The fight for indigenous rights has existed at a global scale since the 1970s (Lane & Hibbard, 2005) but has only been recognised via international declaration (namely, the United Nations Declaration on the Rights of Indigenous People) since 2007.